Koby is four and a half years old and has tuberous sclerosis complex (TSC). His mum Fiona says, “Koby is a bundle of fun. He is very social and loves being outdoors playing with his dog Leia, ‘going boats’ (kayaking), camping and playing ‘kick ball’ (soccer).” (November 2018).

Fiona first noticed something wasn’t quite right when her third child Koby was born. He had a couple of unusual white birth marks. The doctors at the hospital didn’t seem too concerned about it but, as the weeks went by, Fiona noticed more of them. By the time Koby was five weeks old he had more than five white patches. Fiona was told it could be an ash leaf spot which may be a sign of a genetic disease and they was referred to a dermatologist for further investigation.

As no more information was given to Fiona, she did as most of us would do and searched online for ‘ash leaf spot’ looking for answers while she waited for her dermatologist appointment. This is when Fiona first heard about TSC. Fiona says “the information I found online was confronting and scary, and it seemed to focus only on the worst case scenario.”

Koby was officially diagnosed with TSC after a brain MRI when he was just eight weeks old. “We were very lucky to be diagnosed so early, before any seizures started occurring. Our paediatrician immediately sent us to an expert in TSC and told me about TSA. I contacted the TSC Information Service straight away and spoke to Debbie who helped me so much. Thanks to TSA I was given up to date information and my mind was put at ease when I was told we would be in great hands with Dr Kate Riney. I was filled with a sense of relief and hope.” says Koby’s mum.

Thanks to the early diagnosis and referral to a TSC centre of excellence, Koby had access to early intervention therapies. These involve regular tests that look for the first signs of epilepsy in Koby’s brain waves and early treatment with anti-seizure medications. When treatment was started Koby started smiling, laughing and engaging with his family. His development went in leaps and bounds.

Koby now has reasonable seizure control despite having many tubers in his brain. While daily life with Koby is generally good, it can take a scary turn when Koby gets sick. A fever can lead to a major seizure and the need for a life-saving trip to the emergency department. Koby’s development is still behind his peers but socially he does well and he is talking more everyday.

Fiona says, “I believe the early intervention helped Koby enormously with seizure control as well as getting on top of all the other things that go along with TSC. It has helped him be the best version of himself that he can be. We will forever be grateful to our paediatrician for his early diagnosis and to Dr Kate Riney for the early intervention program she set up for Koby as well as her continued help and support.”

Fiona says, “Investing in early intervention research is so important for families living with TSC so we can keep on making improvements in the health and wellbeing for children like Koby”.

Koby has too many tubers in his brain to count, as well as tumours on his kidneys, eyes, skin and on his finger. Yet every day, Fiona is thankful for the early intervention she knows has helped Koby be the best he can be. 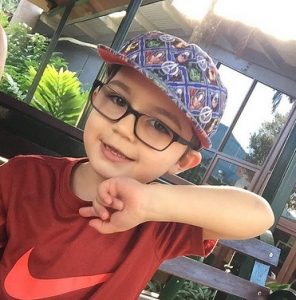 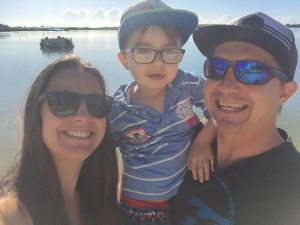 This is a confidential service where you can speak to a qualified nurse and ask questions about anything to do with tuberous sclerosis complex (TSC).