Parker, who lives in South Australia and is 4 years old,was tentatively diagnosed with TSC in utero and had his diagnosis confirmed when he was just 4 days old. In this Q&A, Katherine, his mum, talks about Parker’s journey with TSC and the role that the mTOR inhibitor sirolimus has played.

When and how was Parker diagnosed with TSC?

Parker was tentatively diagnosed with TSC in utero. I had 3D pictures done in Port Augusta in South Australia at 31 weeks which picked up an abnormality in his heart. At 32 weeks I was sent for a growth scan, also in Port Augusta, which confirmed the presence of the abnormalities. I was then referred onto the cardiology department of the Women’s and Children’s Hospital in Adelaide and had a foetal echocardiogram at 34 weeks which led the cardiologist to believe that my baby had TSC.

I had a few more ultrasounds after this, as the health professionals felt it was likely there were growths in other organs. They were right. Growths were found in my baby’s brain and in his kidneys too. Our birthing plans were relocated and we were reclassified as a high risk pregnancy. I was induced at 38 weeks. Parker had an MRI of his brain when he was just 4 days old during which the neurology department confirmed the diagnosis of TSC and spoke to us in depth about it.

Who recommended that Parker be given sirolimus?

Dr Nick Smith, Head of Neurology at the Women’s and Children’s Hospital in Adelaide, has been our main point of contact for Parker since birth. When Parker was just 1 week old, Dr Smith suggested that he be given sirolimus to shrink the growths that were found in his brain, heart and kidney. Parker was started on
sirolimus in the special care nursery at the hospital. In the past, the technology wasn’t available to pick up TSC prior to birth and, because we had the “perfect head start”, the medics wanted to get on top of it as soon as possible.

Do you remember what your feelings were about this at the time?

I remember sitting through the initial chat with neurology at the time of Parker’s first MRI. When I returned to my recovery room I just burst into tears; at 4 days postpartum, as a first time mum, the floodgates opened for me. It was extremely overwhelming, and this had come totally out of nowhere, as I literally had no other problems during my pregnancy.

We were told Parker’s TSC was genetic, which blew us away and made us both worry.

Not having Parker in my recovery room for the duration of my stay at the hospital was also upsetting. I remember having to use the elevator to get on the right floor for the special care nurseries and spending most of my time in there. That was a little scary too. When Parker started on the immunosuppressant, the staff took every precaution possible and put up the STOP sign in the little private room in the nursery they moved him to. We had to get fully gloved and gowned up just to go in to see him. That was also a bit hard as we were still coming to terms with the whole situation.

How did Parker react to the treatment – were there any side effects?

Parker responded amazingly to the sirolimus. The growths started shrinking quite soon after starting it and the rate at which they got smaller was also quite fast. The neurology team were surprised and impressed. The most important side effect was that Parker didn’t have an immune system to fight anything if he was in contact with germs (with sirolimus being an immunosuppressant) so we had to be extremely vigilant with family and visitors both in the beginning and later down the track.

Other than that, I remember the health professionals telling us that the sirolimus would impact his growth and development. However, Parker put on 12cms every week for the first 12 weeks of his life which was surprising. Early on he wasn’t feeding from the breast very well so we switched to bottle feeding expressed breastmilk and monitored his intake. Later on he started meeting milestones. These were slightly later than other babies, but he was never that far behind. For example, he first rolled at 6 months, crawled at 11 months and walked at 17 months.

What do you believe were the benefits of giving Parker sirolimus?
The main and most important benefit was to shrink the growths in his organs. Since reading more about TSC and following posts on TSA’s closed Facebook discussion group, I know there are other medications available that do the same thing. However, we put our trust in the neurology team, and in Dr Nick Smith in particular, to make the right decisions for Parker. It paid off, as we got on top of it so quickly and Parker responded amazingly to the medication.

Why did you decide to stop sirolimus treatment when Parker was about 2 years old?

Nick Smith felt that the growths were small enough to not be of concern anymore. We were told that, in their experience (i.e. in the experience of South Australian health professionals such as neurology, cardiology or renal), growths do not start to increase after stopping medication.

How old is Parker now and how is he doing?

Parker turned 4 on Australia Day this year. He is doing really well. He started having infantile spasms at 3 months of age, but he was promptly put on vigabatrin to stop them. He had his last spasm when he was 6 months old and we took him off that medicine at 2 years of age. We still see neurology quite regularly but cardiology has decreased his appointments to every two years instead of annually and renal now only want to monitor him annually instead of six monthly.

We hit a little roadblock over the Christmas/New Year period when Parker started having seizures again, this time of the focal type. They mostly occur when he is sleeping but he has had a couple while awake. Neurology rushed us down to the Women’s and Children’s Hospital in Adelaide (we now live in Roxby Downs, South Australia) for an EEG and a consult with Nick Smith who started him on Keppra to hopefully resolve the seizures. At the moment, we are still getting the dosage right, so he is still having the focal seizures overnight. Besides that, Parker has been seeing a speech pathologist and occupational therapist for the last 12 months and is making great improvements in both areas. He started kindergarten this year and, although drop off time is hard, he enjoys himself while he is there.

Would you consider giving Parker sirolimus or another mTOR inhibitor drug in the future if the health professionals recommended this?

If the need arose and Dr Nick Smith thought that sirolimus or another type of drug was the best choice for Parker, then we would again put our trust in him and absolutely put Parker on it. Nick hasn’t taken anything about Parker’s situation lightly which has really impressed us and he has always given us reasons for what he has proposed to do and informed us as best he can.

What would your advice be for other TSC families?

Although it is a rare disease, there are other people out there who have experienced the emotional upheaval, the sense of the unknown, the stress and the constant flow of appointments, ultrasounds, tests and scans that accompany TSC. Although it can be super overwhelming, my advice is to reach out – find the TSA website, join the Facebook Discussion Group and be amongst others who are going through exactly what you are. You also need to put your trust in your primary specialist and believe they are going to make the best decision for your child (or whoever it is that has TSC) and best manage the condition.

Also, as a member of the TSC community, you always need to be ready for a curve ball! I’m not religious, but a mantra I repeat to myself is that whoever is ‘upstairs’ will not give me more than I can handle. I also believe that everything in life happens for a reason. 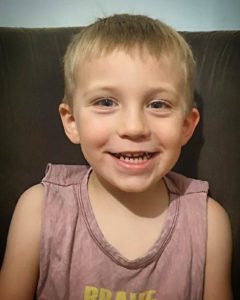 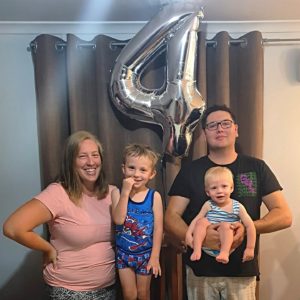