It took my wife Michelle and I nearly two years to fall pregnant with our son Oliver. We were so excited when we found out about the pregnancy, even though this meant we had to quickly rearrange the dates of the round-the-world trip we had just booked!

I can clearly remember the day we started on this roller coaster with tuberous sclerosis complex (TSC). It was a Friday. In the middle of our 28-week scan the sonographer stopped and consulted a large book. We did not know what was going on and we were possibly a little naïve as, up until that day, nothing unusual had been picked up. After she left the room and came back, we were told that the obstetrician would see us immediately.

He said: “Something has been found on the scan. We are not sure exactly what it means but I have booked you in to see the cardiologist at the Children’s Hospital on Monday.”

I remember us both being like deer in the headlights that weekend.

On Monday the cardiologist did another scan and said: “We suspect it is tuberous sclerosis and we will arrange for the genetics team to see you in an hour.”

The geneticist told us not to worry too much and that they would confirm the diagnosis with a genetic test after our baby was born. We decided not to tell anyone about the tumours or about TSC until we were 100% confident of the diagnosis.

We were in a haze. The whole experience was a blur. Of course, despite being told not to, my wife and I researched TSC online and we both reacted differently to all the information we found. I was able to understand that many of the stories I read were ‘worst case scenarios’ and that we would have to  monitor our baby to look out for these different issues. Michelle found these stories caused anxiety and uncertainty. It was important for me to understand the causes, mechanisms and statistics of TSC. Michelle was more focussed on the emotions. I think these two approaches complemented each other.

Despite being nervous about all of this, we were still excited to have a child on the way. Because of the suspicion of TSC, Michelle was flagged as a high risk pregnancy, meaning we had more monitoring during the rest of the pregnancy and the plan was made to deliver our baby by caesarean section. Oliver was born and was perfect weight and length.

When Oliver was six weeks old he had his first MRI, and blood was taken for genetic testing from Oliver, Michelle and myself. The result came back when Oliver was six months old and confirmed that he had a mutation on his TSC2 gene and that neither Michelle nor I have this mutation.

The whole experience was a blur. Of course, despite being told not to, my wife and I researched TSC online and we both reacted differently to all the information we found. I was able to understand that many of the stories I read were ‘worst case scenarios’ and that we would have to monitor our baby to look out for these different issues. Michelle found these stories caused anxiety and uncertainty.

We made the decision to start telling our friends and family what was going on. It had been difficult to go back and forth to the Children’s Hospital without our family knowing. We were glad that our family was able to get to know Oliver as a normal child, without constantly thinking of seizures, TSC and special needs. We explained that Oliver had TSC but we were unsure what impact it would have on his life. We wanted to be confident in our own TSC knowledge to be able to answer their questions and not have to send them on an internet search.

As the months went by, Oliver started to miss some of his milestones. This was very noticeable as close friends of ours had a baby born on the same day as Oliver and his cousin was born only six months later, so these other babies were a bit of a benchmark for us. This delay meant Oliver started seeing a team of therapists – occupational and speech particularly.

Oliver was started early on epilepsy medication as a baby, after his EEG test showed some seizure activity. After a while, we started to wean him off that medication. I can still remember his first noticeable seizure when he was two years old. I was walking with him in the city and he stumbled and fell. After I picked him up he fell straight to sleep. At first we were freaking out and trying to follow the neurologist’s instructions to video each seizure. It got easier to automatically take out our phones and record seizures and email the videos to the neurologist.

We found it a challenge to educate his day care team on his seizure management plan. As soon as we felt like the team was familiar with his seizures and the process, there would be a staff change and we’d have to start with a new team member. By the time Oliver started school we were very skilled at this and could quickly adapt the information we provided to suit the new situation and Oliver’s needs.

When I look back at our lives before we ever heard about TSC, I think we had blinkers on. Once we were told our baby may have this serious condition, I started to see what others were going through particularly with children with epilepsy, autism and learning delays. I had previously never really thought about the day to day lives of people but now the blinkers were off, I started to ask questions about how we would get what we needed for Oliver. One example of this is Brainwave. Through Tuberous Sclerosis Australia we found out about Brainwave and we have since been involved in their camps and activities and met many other families with children with a neurological condition.

If I had the chance to write a letter and send it through time to myself back when Oliver was diagnosed, I would tell myself not to stress. Despite the challenges that are in your future, you will still enjoy the journey. You have a lot to learn but your child is really not any different to any other child. He will have his own personality and he will take so much joy from life. Treat your child like a normal child. Don’t look too far into the future because you risk missing out on the successes of the present.

We have given Oliver as normal a life as possible. He loves both exploring the outdoors and watching sport with me on the couch. He loves planes, trains and cars and asks ‘why?’ constantly. He does have some delays and attends school in a support unit with just five other peers. He still goes to the library and chooses the books he wants to borrow. While he can’t read the books properly yet, he enjoys telling us what is on each page. He is a typical seven year old and has all the attitude that comes with that. 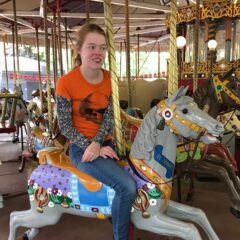