Greta is eight years old and has tuberous sclerosis complex (TSC). She has two older brothers and we live in a coastal town in Victoria. Because of Greta’s TSC we’ve all been through a lot and this story focuses on that part of our lives. Other than that, we’re a pretty normal family. Greta is a very “girly” girl and loves dancing, singing and horseriding.

During my pregnancy with Greta and her twin brother there is a day that I remember as the worst day of my life! Greta’s older brother was 18 months old and my Mum was very sick with brain cancer. At the 28 week ultrasound for the twins the sonographer found rhabdomyomas in Greta’s heart. I think I was lucky that I had these extra scans because Greta was a twin. Without these we wouldn’t have even known. I was really fortunate to have a sonographer who knew about TSC and quickly referred us to Melbourne for further scans.

The tests in Melbourne confirmed the cardiac rhabdomyomas and also found 27 tubers in her brain. We were put in a little room. My husband was with me and we had our older son watching the Wiggles on a DVD player. We really did not know what was going on. The paediatrician who confirmed Greta’s diagnosis had very out-of-date and inaccurate information about TSC – but we didn’t know that at the time. We were told that our unborn baby would be born a “vegetable” and we needed to think about palliative care for her after she was born. We were beside ourselves – I don’t remember crying so much before.

This doctor’s misinformation made that day the worst day of my life. It was just horrible.

We went back home and saw my obstetrician. This showed me the difference it makes having a doctor who has good information. She had read our notes, researched TSC and knew that what we were told in Melbourne was not accurate. We think she probably also made a few angry phone calls because, when we went back to Melbourne, we saw a completely different set of doctors, including the head of paediatrics and genetics, who helped us to understand the spectrum and explained aspects of TSC as ‘maybes’ and that we didn’t know how TSC would affect Greta. We were better and calmer with that information.

We had to stay in Melbourne near the hospital until the twins were born. They were worried about whether Greta’s largest rhabdomyoma was going to block her artery when she was born so didn’t want me to go into labour at home.

At 36 weeks’ gestation, I had an absolutely perfect, lovely, natural delivery with the twins. Greta was twin one, so she was the one who decided they were coming. We had had all these fears that she would come out fitting or all these sorts of things. It was such an unknown. She was a perfect and gorgeous baby. Her twin brother actually needed more help – he was the one who was not breathing. We had all these fears and worries about Greta and then it all had to change over to her brother for a few minutes. But he was also fine and they both went to the special care nursery for monitoring by a great team who were making sure Greta was OK.

While I was in labour, I got news that my Mum’s health had declined so we had to rush back home within 24 hours to be with Mum. From the second we got home our wonderful paediatrician has been there and he was, and is, fantastic.

Mum passed away when the twins were about six weeks’ old. Although that time was all a blur, it was probably around then that I noticed infantile spasms in Greta. I noticed them then my husband noticed them. We took videos but our paediatrician kept putting them down to reflux. The gut instinct of a Mum is such as strong thing and we were looking out for infantile spasms. We were seeing the paediatrician weekly and one day Greta had a spasm in front of the doctor. He went white and agreed that it was indeed an infantile spasm. This was a month after I first noticed them. From that day onwards, if I ever need anything from him, I get it straight away.

The next day we were at the children’s hospital in Melbourne and met our amazing neurologist, with whom we’ve now  established a trusting and consultative relationship. Tests done at Royal Children’s Hospital confirmed all the different signs of TSC that Greta had and diagnosed a sporadic mutation, the first in our family. Greta tried various medications for her seizures – Sabril (Vigabatrin), Keppra (Levetiracetam) and Epilim (sodium valproate). However, her seizures just got worse and worse over the next 12 months. Previously she was bright, saying a few words and trying to crawl. Once the seizures got bad it was like she wasn’t really there and she stopped talking. The constant comparison with her brother made it particularly difficult to see her development go backwards. We needed to use emergency medication and be transported to hospital by ambulance. Once, Greta had a seizure in the bath, aspirated and needed to be resuscitated.

It was then that Greta’s neurologist suggested brain surgery and arranged for her to be considered for this. We knew if we did nothing, Greta wasn’t going to survive, so this was an easy decision for us. By the time Greta had the surgery she was three years old. It was a two-stage surgery with a grid placement and then a tuberectomy. The surgeon removed four of her tubers.

Letting Greta go for surgery was just the worst time. It’s like pulling out your own heart and handing it to a doctor and asking them to look after it. The team was amazing, calling us multiple times throughout the 12 hour surgery to assure us that she was going well. We had absolute faith in them as well. We knew that what they were doing was world leading and we were lucky that this was available to us.

Greta recovered really well from her surgeries. Kids are fantastic like that. When we took her home, Greta was still having seizures and that was quite disheartening. Even though we were told that it would take some time, we still hoped it would be immediate.

But the seizures were fewer and less severe and what was miraculous was that, after the surgery, instantly, she was 100% with us. To us, the surgery was worth it, just for that. Even though she was still having seizures, her development went forward in leaps and bounds, particularly her motor skills.

About four months after surgery the seizures slowly reduced and eventually her EGG was clear. Greta’s language also caught up and now I often joke that I wish she’d shut up! She’s a bit of a princess and a bossy boots. She’s now five years seizure free, without medication, and we don’t even have to tick epilepsy on forms any more.

Up until that point we had this horrible feeling of how our life was going to be. Now we still have our visits and check-ups but it is no longer something that rules our lives.

Greta went to day care, and I was able to go back to work to a job that I love. That was fantastic for all of us.

Greta goes to the local school and they provide her with additional support as she has a mild intellectual disability. She’s in grade 3 this year and she can count and knows her alphabet. For some people these are small achievements; for us they’re massive. Greta has learnt to ride a two wheel bike and she loves her all abilities dance group “Let’s Dance”.

She loves school and last year she was the junior primary school captain because she is very forthright and social. She has lots of friends and is close to her brothers and cousins. She gets invited to more parties than her brothers!

There have been hard decisions all along the way, including whether to send Greta to a special school. I don’t think there’s ever a single right or wrong answer to these questions and we’ve always tried to do what is best for our family.

Through our paediatrician, we met TSA volunteer Narelle Kerr whose daughter Lily is very similar to Greta but a few years older. It’s been really good to talk to Narelle during the bad times and to know that they have been through similar things. It’s important to me to know that there is someone there who I can call. No matter how much your family and friends care and love you, they don’t know what it is really like. I also value the Facebook discussion group. We also use the TSA website and find it useful to send our friends and family there to learn more about TSC. We give copies of the clinical guidelines for TSC to Greta’s doctors if they don’t know about TSC.

There are a number of things that we do that make life with TSC easier. We intentionally don’t think too long term. We know that with TSC a lot of things are a “what if” – we’re not ignorant, we just avoid sitting in constant worry. I also have good mental health support and I highly recommend this to other people  – the better your head is, the better it is for the whole family. I am also very conscious of the impact on Greta’s two brothers and we schedule one-on-one time with the boys. They love her and they’ll protect her to the ends of the earth, but we also give them permission to say that it’s hard sometimes.

If I could travel back in time to the day of that first ultrasound I would tell myself it is all going to be OK. You’re stronger than you ever knew you could be.
I’d also remind myself that my husband is an amazing man and this challenge will make our relationship stronger and teach us truly how to not sweat the small stuff. Yes, there are bad days, but life is pretty good.

Greta is the “girly” girl I always thought I’d have. Greta learnt to talk through song and music, especially the top 40. For Greta’s seventh birthday we bought her tickets to the Taylor Swift concert and had a big girl’s weekend in Melbourne. We were upgraded to the very front and were almost able to touch Taylor Swift. That was one of the best nights ever, seeing Greta being a normal little girl with the joy on her face, having the most wonderful time. It was a massive release of breath that I didn’t even realise I had been holding. It was like we’d made it. 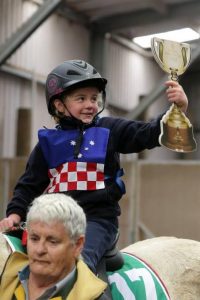 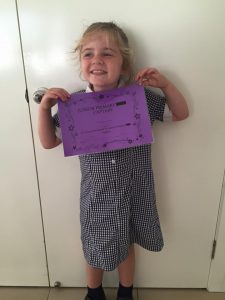 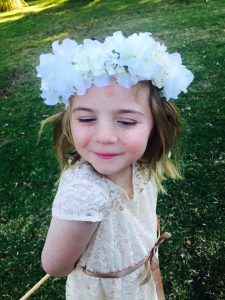 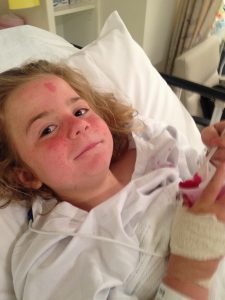 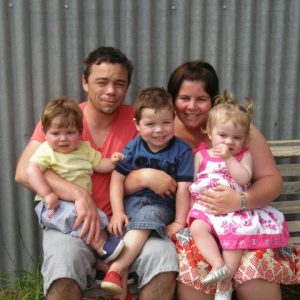 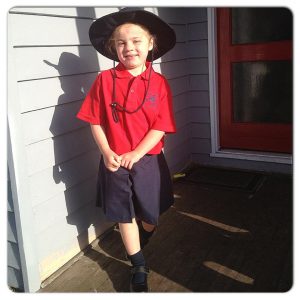 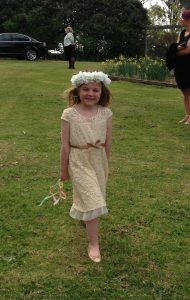 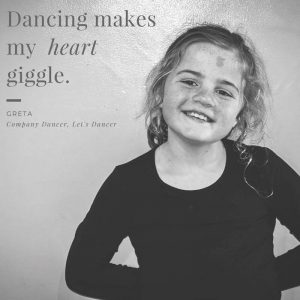 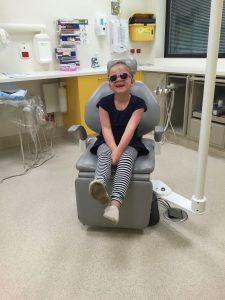