In each edition of Reach Out, we publish the collective wisdom of TSC families from around Australia and New Zealand on a particular topic in a section called ‘Just between us’. This article on Genetic Testing was published in the May 2014 edition of Reach Out.

Remember that, like all information in Reach Out, this page represents the opinions of the author(s) and not official pronouncement of ATSS Inc. This information should not be used without first seeking medical advice.

Changes in Genetics Over Five Years: A Story of Not Being Tested

We don’t often think of much changing over a 5 year time span, however our experience is that genetics has been an area of tremendous change. 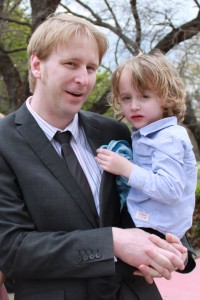 Our son was diagnosed with TSC at 20 weeks gestation – over 5 years ago. As such, our relationship with his geneticist actually began before his birth. In the weeks leading up to his birth and in his first couple of years we visited our geneticist a number of times. At the time he described TSC testing as not being done in Australia, extremely expensive and that there was a reasonable chance they would not find the mutation. Following an extensive physical examination and family history taking of both myself and my wife our geneticist was confident that neither of us had any signs of TSC. As our son has clear clinical signs of TSC, he felt this was a new (or sporadic) mutation and considered that there was little value in doing genetic testing as it wasn’t going to contribute to his diagnosis.

We have a family history of PKD. The PKD gene sits beside one of the TSC genes. Our paediatric neurologist was (and probably still is) convinced that this was too much of a coincidence and sent us back to our geneticist. Our geneticist suggested we do a microarray gene test to look for a large deletion (which would affect the TSC2 and PKD gene). The testing failed to show any signs of a large deletion. Our neurologist remains sceptical, however our geneticist assures us that genetic mutations don’t spread across genes and this would not have been a factor in our son developing his sporadic TSC mutation.

Fast forward to 2013. We were very excited to discover that we were to have another child, but as with all parents who have a child with TSC and haven’t had any testing we had feelings of fear, anxiety and apprehension that this child may too have TSC. We couldn’t help but think that despite not having TSC perhaps one of us does carry the mutation!

{blockquote]We had feelings of fear, anxiety and apprehension that this child may too have TSC.[/blockquote] We went to again see our geneticist during this pregnancy. Whilst testing is now easier, he explained that it remains more expensive to test for TSC than map a person’s entire genome (yes this doesn’t make sense).

He again reminded us that:

With regards to testing our son who has TSC, he said that if there was a reason to test (eg. A treatment is shown to benefit one mutation over another) then they would be happy to test him. But as things stand testing wouldn’t influence his treatment. He did say that if our son was born now, he probably would test him as epilepsy is more common with one mutation and he could have early more intense follow up and treatment.

In conclusion we have a very healthy and happy new baby, with no signs of TSC. Our take home message is; discuss the options at length with your geneticist, get all the information you can to inform whatever decision you make, and remember that no test in medicine is infallible. I think that as the technology becomes more available people like us who have not been tested will become less common in the TSC community.

Kristian was diagnosed with TSC at 7 weeks old. At a visit to the Sydney Children’s Hospital TSC clinic, genetic testing was offered. This was intended to confirm the diagnoses and to establish which genes were affected, including whether or not he had the second deletion of the PKD1 gene. 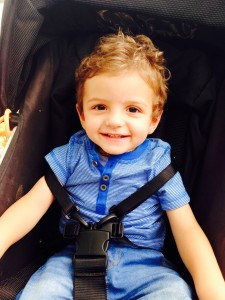 We agreed to undertake this testing, for our own knowledge and for possible assistance with treatment options in the future.

Because we are a young family, we were asked whether we would like to undertake the genetic testing for ourselves. We would then be well informed, should we wish to have another child. We agreed to this and provided our own blood samples.

Our results returned in a shorter period than our son’s, as they knew what to look for, based on our son’s results. Neither myself not my husband carry the gene mutation, so Kristian’s case was sporadic.

Although our daughter is showing no clinical signs of TSC, we will offer her the option of having genetic testing done when she is old enough, for peace of mind when/if she wishes to start her own family.

TSC sure is a rollercoaster, but knowledge is POWER and we are glad to have the information from the genetic testing.

Was he kidding? Kate's story

“When are you planning to have your next child?” probed the geneticist.

Was he kidding? I was a first-time mum and my newborn had just been diagnosed with TSC. I barely knew what TSC was, let alone what it meant for my son, for me, and for any thoughts of siblings.

It was also odd to choose to add a medical invasion for a wee baby who was already getting more that his fair share. This wasn’t treatment after all, but a blood sample for a cause that seemed almost selfish.

{blockquote]Of course they can’t tell you how mildly or severely your particular child will be affected by TSC.[/blockquote] After close to a year, which included the sample being analysed in Europe* and us parents yielding blood samples too, the results indicated a spontaneous TSC2 deletion. One day this knowledge might be of use to Liam, but for now he’s treated according to symptoms not his genetics.

We were able to try for a child two years on, without needing IVF, and knowing we didn’t have that TSC mutation ourselves.

We also elected to have testing in utero for Henry to check whether he possessed the same deletion.

I struggled waiting for that result. Of course they can’t tell you how mildly or severely your particular child will be affected by TSC. Liam was two and progressing well, albeit with his own suite of health and developmental issues to manage. We couldn’t tell when he was diagnosed at just eight weeks old that he’d grow into a happy, mobile, communicative kid. So how could we make a decision about his brother before birth? The result was turned around in about a fortnight. He didn’t have the deletion.

I think without genetic testing we would have been frightened about trying again for a child.

*This testing occurred a number of years ago. Turnaround times for laboratories doing TSC testing are usually shorter than this but will vary based on the laboratory used by the genetics service.

I used genetic testing because my sister had TSC and I wanted to start a family of my own. Testing gave myself and my husband the reassurance that we needed that our baby wasn’t at a higher risk of Tuberous Sclerosis.

My sister Lizzie was severely affected with TSC and also Polycystic Kidney Disease (PKD). We confirmed that this was due to a large deletion across the TSC2 and PKD1 genes as a part of setting up the TSC genetic testing in Sydney. My parents had then also been tested: it was confirmed that they didn’t have Lizzie’s mutation.

The possibility that played in the back of my mind was that one of my parents was mosaic for a TSC mutation and that they had passed on this mutation to both my sister and I. I knew the likelihood of this was really small, plus I showed no clinical signs of TSC. But I was still anxious to rule TSC out before we had any children. So we made an appointment to see a genetic counsellor.

My husband and I both found the appointment really informative and useful. The counsellor took a full medical history from both of our families. She also explained the genetics of TSC which was especially helpful for my husband. I went upstairs for a simple blood test. 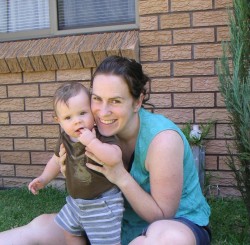 A couple of weeks later the results were returned. As we all expected they were negative; I did not carry the TSC2/PKD1 mutation that Lizzie had. This meant that I was as likely to have a child with TSC as anyone without a TSC affected family member – about 1 in 6,000. Since then we have had two lovely boys, Elliot and Julian, neither of which have TSC.

I felt silly for wanting the genetic test – I knew that it was incredibly unlikely that Lizzie was anything but a sporadic mutation. However it was very helpful when Elliot had a number of focal seizures when he was 18 months old. I was able to confidently say that I knew it was a seizure after seeing my own sister have many of them. The gene test allowed me to then explain that despite this family history that I was confident that Elliot did not have TSC. The ATSS Facebook Discussion Group did offer some very useful advice about how to get an 18 month old to sit still for an EEG!