Remember that, like all information in Reach Out, this page represents the opinions of the author(s) and not official pronouncement of Tuberous Sclerosis Australia. This information should not be used without first seeking medical advice.

Receiving a diagnosis of autism for your child who already has Tuberous Sclerosis was probably the biggest challenge we faced when our daughter Alana was four years of age. For a child who already had severe seizures and a severe intellectual disability, adding autism to this list was very overwhelming for our family. Autism presents many challenges on a daily basis and although these have lessened as Alana has got older, it still affects our child and our family on a daily basis.

The biggest challenge we face is communication as Alana is nonverbal and is not always able to show us what she wants. With the help of early intervention and ongoing therapy she has improved; however, we have learned that this progress is very slow and many small steps are needed to achieve a goal. We found showing photos to her when she needs to make a choice has helped her communication, and the teachers at her special needs school have played a major role in supporting us with this type of communication.

We always consider ourselves lucky that Alana’s behaviour is very good and she is a calm and happy child who likes to socialise with others. This was not always the case and it was very difficult when she was younger to have a “normal” day out. Although things have improved, we always have to plan ahead before we go out and ensure that she will be able to cope with where we are going and what we will be doing. Again, we have learned strategies through a specialist autism therapist to help us, giving us the confidence to try new things and give Alana the same experiences other children have.

Finding information on autism and how to help your child is very difficult as there are so many different points of view and conflicting research. One book that did help was the Australian Autism Handbook by Benison O’Reilly and Seanna Smith. This book was very easy to read and provided really useful information that was relevant to Australia.

Alana will be turning ten years old next month. Looking back from where we are now, it has been a long and challenging journey. The biggest lesson we have learned from our experience with autism is to take one day at a time and celebrate the small achievements.

Normal is Boring - Life with Hamish 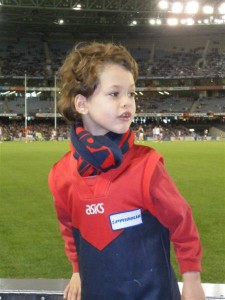 Last Sunday morning I woke up with my son Hamish, Spike the cat and a broom in my bed. This was not entirely unusual. Welcome to my world.

Hamish is eight and has Tuberous Sclerosis Complex, which was diagnosed when he was two days old. He has global developmental delays, no formal language yet, and is intellectually somewhere in the region of a two year-old. He also has the face of an angel, an array of very effective communication and charm techniques, and is endlessly funny. While Hamish is not technically autistic as such, he has what are termed “autistic tendencies”. These include the lack of speech, lots of happy flapping and a tendency to wander off if given half a chance. Fortunately he is never presented with that chance. Life with Hamish can be challenging at times and not always predictable. I’ve found that maintaining an open mind and trying to see the humour in situations is essential. His schooling is a great example.

Hamish is in his third year at the Port Phillip Specialist School in Port Melbourne. During the term, the school bus arrives to collect him at 8.35 each morning. Hamish loves catching the bus and is loudly greeted by the other kids when he hops on. On his birthday recently the whole bus sang Happy Birthday to him before they set off. They certainly got the attention and a few smiles from the people walking past our house.

At school Hamish is in a class of five children, with a special needs teacher and two assistant teachers. His curriculum consists of art, music, drama, dancing, literacy, numeracy and swimming. In Hamish’s class, it also includes Swahili as a second language! Peter the assistant teacher is from Kenya and is teaching Swahili words to Hamish and his classmates. I’m not sure how much Swahili is sinking in with Hamish, but given that his other teacher is from the USA, I’m half expecting him to start speaking Swahili with an American accent.

PPSS is a lovely school and the care and dedication shown by the staff is amazing. Hamish is thriving in this environment. His sense of humour and love of silliness is encouraged, even if it involves him throwing all of the class teddy bears out the window or getting soaked in water during sensory play. When I arrive to collect him in the afternoon he is always happy and draws out the leaving process as long as possible. This routine includes giving each of his teachers a good bye pat on the face and trying to sneak out the door with whichever toy he happens to be playing with. By the time I’ve chatted to his teachers, extracted Hamish and said hello to the other parents, it is often a case of the long good bye.

Schooling is the area where I find the greatest contrast between Hamish and his fifteen year old brother Alex. Alex is in Year Ten at an all boys school where he has recently discovered a passion for mathematics and sciences. He has just chosen his Year 11 VCE subjects and is hoping to do astrophysics at university. Whilst Hamish and I both love his school, it saddens me sometimes that he will never have the same sort of experiences that Alex is enjoying. On the other hand, Hamish will never have the sort of pressures that his brother is facing, such as exams, entrance scores, and many of the other tribulations of being a teenage boy. On a purely selfish level, I will only have to go through the drama of a son doing VCE once. Hamish’s achievements will be different and at his own pace, but no less meaningful.

At home Hamish loves to potter in the garden, sort through his toys, play on the iPad and snuggle. The obedience he shows to his teachers usually magically disappears at home, where it is replaced by what I call selective deafness. Which is not to say he is naughty. He’s a very chilled little boy, but has plenty of attitude and is very good at getting his own way. He’s also a master of passive resistance. When bedtime rolls around he won’t kick and scream if he’s not tired. Instead he will walk with me to bed, but gradually sink to his knees, then onto his hands and knees, then finally onto his tummy in the manner of a reluctant snake. Hamish thinks this is hilarious. Once he’s finally slithered into bed he usually goes to sleep pretty quickly. The nights when he decides he doesn’t want to sleep can be interesting. He will either very calmly come out of the bedroom again and again to show me that he’s still awake, or he’ll quietly and efficiently pull everything out of the cupboard and scatter it across the room. I personally prefer the first option.

Like many developmentally delayed children, Hamish goes through phases of being fixated on a particular toy or domestic item. The egg whisk is a perennial favourite and the dish brush also frequently goes missing. He also has a number of locations around the house where he “posts” items. Fortunately he realises that car keys, mobile phones and sunglasses are off limits. Luckily, Hamish also loves food and will try almost anything. His tastes actually run to the quite exotic. He prefers camembert and quince paste on water crackers to Twisties and loves anything spicy. However, chocolate and ice cream are his first loves, so in that respect he’s much like all eight year old boys.

Which brings me back to waking up with Hamish, a broom and a cat. The broom is his latest fixation. He drags it across the floor, swings it around and takes it with him to his thinking spot on top of the step ladder, where he sings to it. He loves it so much at the moment that he brought it into bed for a cuddle. Along with his opportunistic cat Spike. Which pretty much sums up life with a child such as Hamish. It’s nothing if not interesting. Sometimes frustrating and occasionally sad, but overall funny and very happy, in a slightly demented sort of way.