Hamish was born at 2.15 pm on a freezing cold August afternoon in 2005. Tiny, but beautiful and perfectly formed. An hour after birth his little heart went into Supraventricular Tachycardia (SVT), which subsequently resolved itself. The paediatrician was paged. Four hours later he was in a Newborn Emergency Transport Service ambulance being transferred to the cardiac ward of the Royal Children’s Hospital, Melbourne; not before a large BMW which was blocking his ambulance was towed away from the maternity unit car park, much to the delight of the nurses. So began our adventures with Hamish and Tuberous Sclerosis Complex.

That SVT turned out to be a blessing in disguise, as it meant we had a diagnosis of TSC when Hamish was just forty-eight hours old. He had rhabdomyomas on his heart, astrocytomas behind his right eye and a head full of tubers. Masses of them, according to the results of his first MRI. We were taken to the quiet room and spoken to gently by the cardiologist. He talked about seizures, developmental delays and possible heart issues. I heard it all, but could only see an adorable little baby boy snuggled into a tiny ball on my chest. Happily, he is still snuggly.

Hamish was liberated from the Royal Children’s Hospital at three days old and set about endearing himself to his big brother Alex, his grandparents, and anyone else who crossed his path. Especially to Alex, who at seven years old had been living in fear of having a baby sister and being surrounded by Barbie dolls! He also got to work his charm on the Mobile Intensive Care Ambulance paramedics who were called when he went into SVT again at ten days old. Fortunately they captured a very useful ECG and Hamish was promptly put on beta blockers. He hasn’t had issues with his heart since then and the rhabdomyomas eventually disappeared entirely as his heart grew.

Next on Hamish’s Tuberous Sclerosis Complex to do list was epilepsy. He met his first neurologist at the Royal Children’s Hospital when he was three months old. At this point he was diagnosed as having infantile spasms. Fortunately, his paediatrician had described, accompanied by hand and arm actions, what epilepsy with Hamish may look like. Ever helpful, Hamish’s seizures started in just that way, so we were on to it pretty quickly. Another drug, Clonazepam, was added to the beta blockers. Unfortunately, his seizures only became worse so Sabril was also added to his daily cocktail. Despite the onset of infantile spasms, Hamish started smiling at six weeks of age and laughing at about twelve weeks.
He was interested in the world around him, fed well, slept well and continued to charm everyone around him. A model baby, apart from the whole TSC thing.

Over the next twelve months Hamish continued to thrive, despite marked developmental delays and increasingly worse seizures. Most importantly, he was happy and healthy. By the time he was twelve months old he was spending four hours a week with the wonderful people at the Malvern Special Needs Playgroup and we were attending a weekly playgroup at Noah’s Ark. We met some lovely people and their children through these organizations, which became an essential support and outlet for us. Hamish started crawling at seventeen months and astoundingly, started walking at twenty-one months.

Although it wasn’t so much walking as a drunken-like stagger. Truly frightening to watch sometimes. It was during this time that Hamish had a seizure that lasted for over an hour. A trip to the hospital in an ambulance followed and Hamish was discharged with another anti-epileptic drug. When Hamish was about eighteen months old his original neurologist retired and we were introduced to his infectiously enthusiastic epileptologist, Simon. This was where the fun really started. After several rounds of EEG video monitoring, SPECT scans and MRIs, Hamish was considered a candidate for neurosurgery to hopefully remove the tubers in his brain which were causing his seizures.

In July 2007, just weeks before his second birthday, Hamish had his first round of neurosurgery. Two large tubers were removed during ten hours of surgery. It seemed like the longest of days, but if I had known what was to come later, I think I would have run screaming from the recovery room! Hamish bounced back from his craniotomy in excellent spirits and somehow still regarded “his” neuroscience ward as a place of adventure and interesting people. Sadly his seizures continued to get worse, so another round of surgery was scheduled. This was to be the incredibly high-tech procedure where probes were placed directly onto his brain during neurosurgery and left there for a week while his seizures and EEG activity were monitored. So, three months after his first round of neurosurgery, Hamish was back for round two. During eleven hours of surgery, eighty probes were placed on Hamish’s brain, his skull stapled back into place (leaving a little hole for all the wires and a drain), and the probes hooked up to a portable EEG monitor. Hamish came through the surgery with flying colours.

Unfortunately, at about 11.30 that night Hamish’s oxygen levels started to drop and his breathing became laboured. The medical emergency team arrived and Hamish was whisked off to Intensive Care with a collapsed lung, which was an unexpected by not unusual consequence of such a long anaesthetic. I was doing the sleepover that night and will never forget how quickly his little room filled with staff, once the red emergency button had been pressed. I knew Hamish was in the best possible hands, but ringing my husband and mother in tears at midnight to say he had been rushed to ICU wasn’t something I ever want to repeat. Not to mention the various central lines and IV pole. He still managed a couple of little walks to keep an eye on his ward.

As luck would have it, on the day the probes were due to come out and more tubers removed, Hamish developed a nasty case of gastro, which he also managed to pass onto his poor neurosurgeon. Surgery was dramatically shortened and just the probes were removed. Hamish and his neurosurgeon both looked a little pale and queasy afterwards, and his anaesthetist was very stoic about having been put on nappy changing duty during the procedure.

After a much needed blood transfusion, which put the pink back in his cheeks, and a bottomless supply of chocolate frogs (just don’t tell the paediatrician), Hamish was successfully discharged again. Still smiling, still bouncing, despite the trauma of having Collingwood football players sing Christmas carols to him while he was in hospital.

Following this, Hamish had two more rounds of neurosurgery to resect tubers. Everything went smoothly and six months after his last surgery, Hamish’s seizures went away. His walking was still alarmingly off-kilter, but once the seizures stopped he found his balance and even started running in an attempt to chase his cat. By this stage Hamish was attending preschool at the Port Philip Specialist School’s Early Education Program two mornings a week, where he is now in grade one at school.

Hamish at six is an amazing, happy, gentle and charming little boy with the face of an angel. Like all six year old boys, he can be evil on the inside! It’s been hard on my older son Alex. He has worried about all of Hamish’s procedures, cried when a child at primary school made a cruel comment about his brother, and celebrated Hamish’s first swear word.

He’s also seen some pretty confronting things while Hamish has been in hospital. I believe Alex will be a more understanding person because of Hamish. He is very protective of his little brother, yet at fourteen, old enough to have his own interests and agenda apart from Hamish. Hamish adores Alex, although I think Hamish’s adoration sometimes has more to do with Alex’s array of computers, iPad and other interesting gadgets with bright lights and tempting buttons.

Tuberous Sclerosis can be a cruel, unpredictable condition and we don’t know what the future will hold for Hamish. He was diagnosed with mild focal seizures a year ago, but his latest drug, Topamax, has almost completely dampened them; it has also had the happy side effect of making him extremely chatty and vocal. He is starting to mimic words, especially a particularly rude one, and walks around giving his opinion on everything, in his own special language, whilst pointing, gesticulating and throwing in the odd expletive. He’s endlessly funny and entertaining and shamelessly plays to an audience, constantly looking at them to make sure they are listening. Best of all (for me) he’s an extremely affectionate mummy’s boy. He still climbs onto my lap and moulds himself to me like a baby, which is bliss.

Hamish’s TSC issues will be monitored as closely as modern medicine allows and problems dealt with when and if they arise. He will be loved all the more for it.

Sometimes I wonder what Hamish would have been like without Tuberous Sclerosis Complex, but without TSC he wouldn’t be Hamish. We wouldn’t have met the amazing friends, doctors, nurses, teachers and others who constitute our TSC world. We wouldn’t have learnt to appreciate Hamish’s many achievements with such joy or been nearly as tolerant of his attempts to wreak havoc. I personally have discovered depths of patience, understanding and empathy I didn’t know I had. Not to mention love. Pure, unadulterated and fiercely protective love for this little creature I’ve been blessed with.

Finally, without Hamish and Tuberous Sclerosis Complex, I wouldn’t have found myself last week gleefully describing, in lurid detail, his every swear word to his neurologist. Hamish was standing on a chair, talking at the top of his voice and our long suffering neurologist was in fits of laughter, both at Hamish and his rather filthy new words. I came away thinking that if a neurological appointment can end up being so funny, then maybe things won’t be so bad. 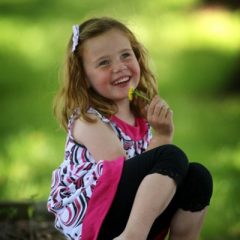 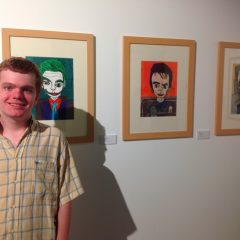 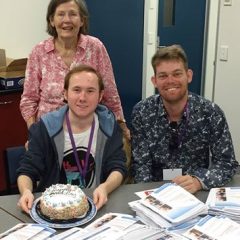 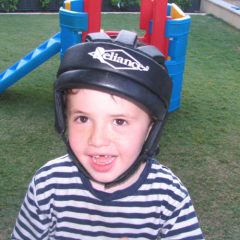